To support Wisconsin’s efforts to contain the spread of the Coronavirus, tje Chippewa Valley Museum closed March 16. As a community space we are following the best practices put forth by public health officials. We plan to reopen under the guidance of the Centers for Disease Control and the Wisconsin Department of Health Services. Our top priority is the health and safety of our staff, visitors and community. We remain committed to our mission of connecting people to our community and inspiring curiosity by collecting, preserving, and sharing our region’s historical and cultural resources. During this time, we will be engaging with you and our community digitally through our website and social media channels. As we all do our part to contain this outbreak, Chippewa Valley Museum wishes to express our deep appreciation to those in the the fields of health and medicine, especially those on the frontlines of the pandemic. Please feel free to ask questions relating to the history of the Chippewa Valley at info@cvmuseum.com, or by connecting with us Facebook.
Exhibits

Racing in the Chippewa Valley

If everything seems under control, you’re not going fast enough.

Harold Mueller once said that racing is 60% luck. Harold would know. He raced stock cars on dirt tracks throughout Wisconsin for over 20 years. But Harold would probably also agree with Aaron Telitz, a Rice Lake native aiming to race IndyCar in 2020: “ [racing] is trying to go as fast as possible, pushing our cars and ourselves to the limit. And if you’re not willing to do that, you shouldn’t be in a race car."

The Chippewa Valley has its fair share of racing. Dirt track racing began in the 1940s. Ice racing in the 1950s. There’s go kart, snowmobile, and motorcycle racing. If a machine has a motor, somebody has figured out how to race it.

This exhibit was born when Dan Perkins and Steve Johnson were talking one day about professional race car driver Herm Johnson. “It kind of snowballed”, said Dan Perkins. Herm had a storied career with two championships and 36 career starts between 1979 and 1985. He also drove in the Indianapolis 500 twice, placing in the top ten both times. Off the track, Herm owned a painting business, ‘Just Herm Designs’, and frequently painted the helmets of other drivers. All this talk about Herm Johnson got other racing enthusiasts from around the area to come forward to tell their stories, personal or otherwise, and after the museum received some Herm Johnson memorabilia from his family, a racing exhibit seemed the natural thing to do.

As for Dan and Steve, they’ve been in the racing scene for a long time as well, though in a more low-key fashion, taking part in amateur races around the area as drivers and support crew. They officially met at the Chippewa Valley Sports Car Club in Eau Claire, and kept in touch through other circles. While gathering stories about Herm, more and more people started sharing their own racing stories. “It just kind of expanded on its own,” Johnson said. Even with all the stories so far, Dan and Steve are still looking for more, and urge any readers to talk with Carrie if they have something to share. All in all, this exhibit is designed to focus on the racing trailblazers in the valley, as well as bring some new interest to the sport as a whole. 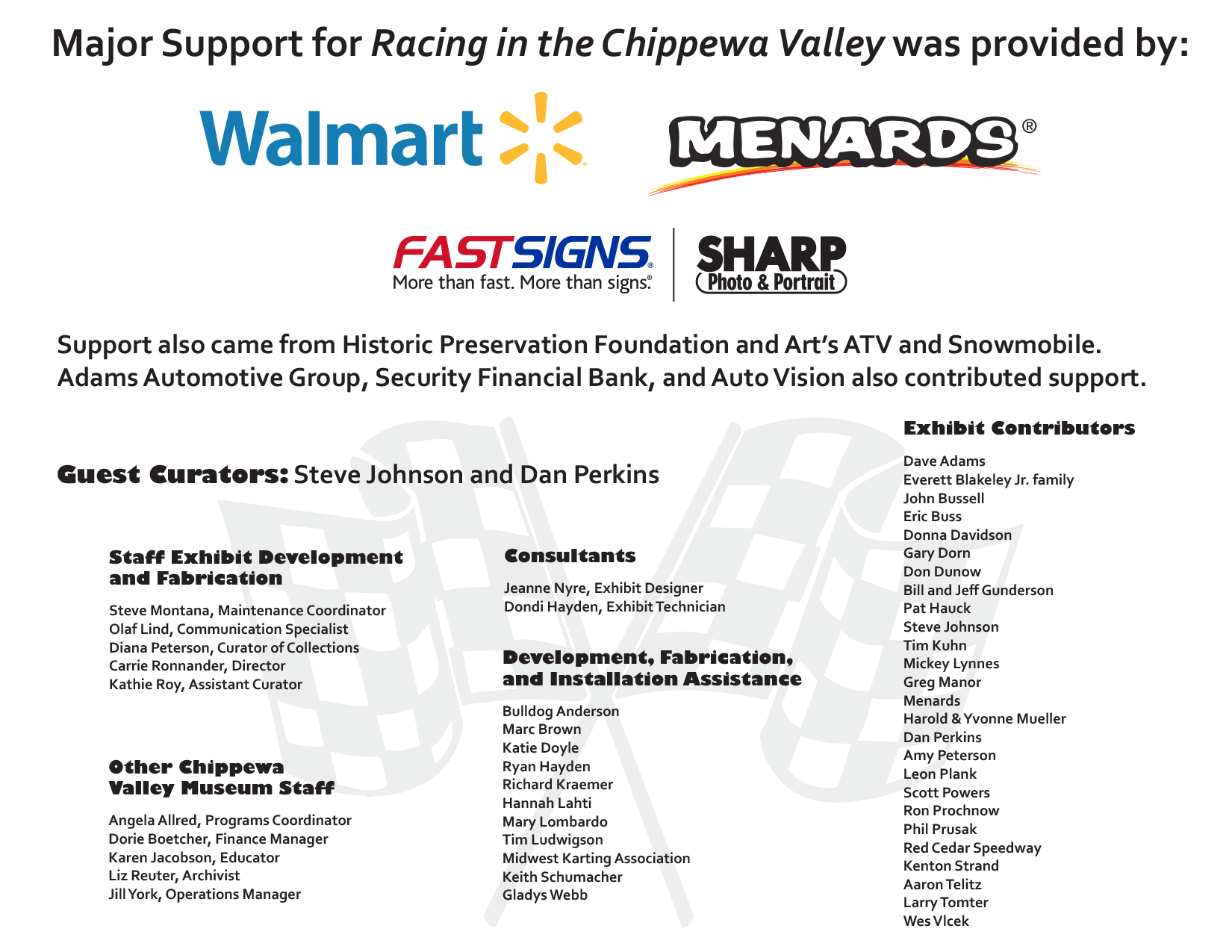 SIGN UP FOR OUR NEWSLETTER STAY IN THE LOOP

Thank you for signing up for our newsletter!